And how to obtain these keys? Why, by playing levels over again until they drop. With 12 keys to unlock all the extra paths on the first world alone, that's a lot of repetition. More so when you factor in the difficulty in obtaining the third stars of each stage in particular. Now, credit where it's due - these additional objectives subtly transform the strategies you need to employ, and alleviate a little of that repetition. In some stages you'll only be able to spend a certain amount of sun on new plants, while others require you to win without losing more than a single unit.

The addition of Plant Food, too, is a smart idea that adds an extra layer of strategy. This is dropped by glowing zombies - or you can spend 1, in-game coins each time you need it - and it gives your plants a boost, the effects varying from one to the other. Peashooters, for example, fire a ferocious volley of projectiles for a few seconds, Wall-nuts gain an extra-hard shell that makes them even tougher to crack, while the Cabbage-pult unleashes a wide area attack that can take down several zombies at once.

You can also spend that in-game cash on power-ups, pinching zombies between your fingers to pop their heads off, or tracing your finger through them to zap them with a fatal dose of electricity. You'll need to use them judiciously, mind - they're costly, and you'll have to shell out real money if you want to use them more than once or twice every few stages.

It's beautifully presented, too: polished, bright, and characterful, and the new plants have personality packed into each and every animation. I'm particularly fond of Bonk Choy, who aggressively thumps zombies within range of his leafy fists, finishing them off with a satisfying uppercut. He is, however, a little overpowered. After experimenting with a few of the new plants, I hit upon a tactic whereby I'd place a Wall-Nut on every row, with a Bonk Choy just behind, and use any Plant Food I collected to protect that defensive wall from being munched away too quickly.

This strategy worked for an alarming number of levels, and became my reliable fail-safe when returning to some of the trickier star challenges, even as I endeavoured to experiment with new plants, for the sake of variety if nothing else. What concerns me most about Plants vs Zombies 2 is that a large part of the original game's fanbase will find the difficulty level far too high without paying to ease the agony of repeated failures.

While just about everything available in the store from the start can be unlocked by simply playing through the game, I imagine younger gamers in particular will be pestering their parents for the money to buy some of the new plants.

Just seeing them in the store will be temptation enough for many, and that's before you take into account the intrusive adverts that periodically pop up, offering temporary reductions on certain items. That's business, I guess.

But perhaps the most irritating thing is that the pacing of the game would probably be perfect if you weren't forced to go back and grind so much. New plants appear on the map at regular intervals, and yet you're often arbitrarily held back from accessing them, asked to cough up or play levels over and over until you're fed up with them. It's a shame, because underneath it all, Plants vs Zombies 2 develops on the first game's ideas in smart and meaningful ways. Plus after level 8 in ancient Egypt you get all the world keys. What happened to the extra hard challenge level that rewarded you with a key.

And what happen to the music that made that level fun.


All the worlds have now only 2 themes. The normal theme and the end of the world boss theme. I really like hearing the remixes of the mini game theme in each world. Until then the game is ok.

Requires iOS 8. Compatible with iPhone, iPad, and iPod touch. App Store Preview. This app is only available on the App Store for iOS devices. Screenshots iPhone iPad. Description "As beautifully presented as it is absorbing to play: 8. Jul 29, Version 7.

Plants vs Zombies 2: It's About Time for iPhone/iPad Reviews - Metacritic 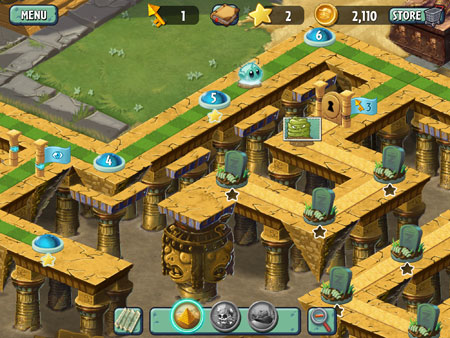